Mongolia has substantial natural resources and minerals, which promise an unprecedented growth potential. Mongolia as a one of the world’s leading mineral resources has over 8,000 occurrences and 80 types of minerals and metals in the 1170 minefield and high prospective for copper, base metals, gold, coal and uranium.

Mining sector is the key driver of the economy

Mongolia is richly endowed with mineral resources and the country is aiming to unlock its mineral wealth by cooperating with our investors.

Mongolia is exporting over 14 types of minerals and China is the single biggest importer. Mongolia has become the largest coking coal exporter (44% as of July 2019) to China, surpassing Australia and Russia.

Substantial proportions of the inward investment has been made in mineral  sector with over 1,777 entities holding 2,861 licenses. 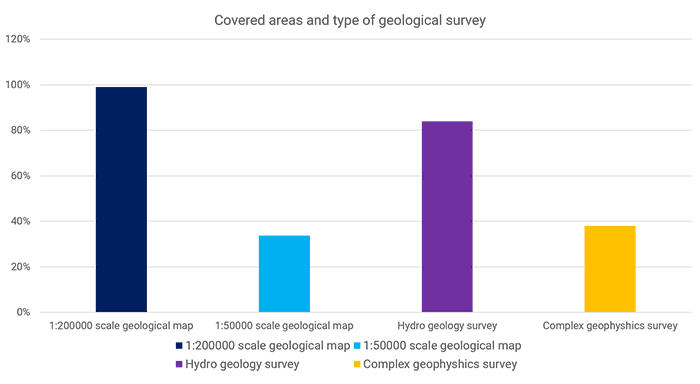 Geological survey have been implemented as a basic data requirement needed to assist in the  development of regional minerals and raw materials, to evaluate proposed mineral resources, to support decision making processes on the issues related to natural and environmental protection, underground wealth use and exploitation.

Forty (40) geologic exploration projects have been implemented in 4 geological fields in Mongolia in 2016. 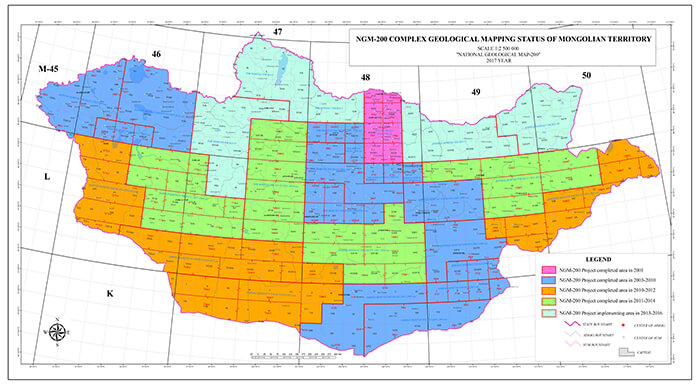 Four (4) NGM-200 projects comprehensive geological mapping have been successfully implemented in 2015, These 4 UGZ-200 complex geological map covered an area  of 287, 924.35 square kilometers which is approximately  18% of total land area of  Mongolia, In addition 100% of the Mongolian territory has been covered by digital geological mapping in 2016-2017. In accordance with the instruction handbook to make “UGZ-200” complex mapping and to prepare the map for publishing, 5 geological maps in 1:200000 scale, for each unit area in Geology, Minerals, Ecology-geology, quadrangle maps and documentations, will be made in comprehensive documentations with supplementary diagrams. 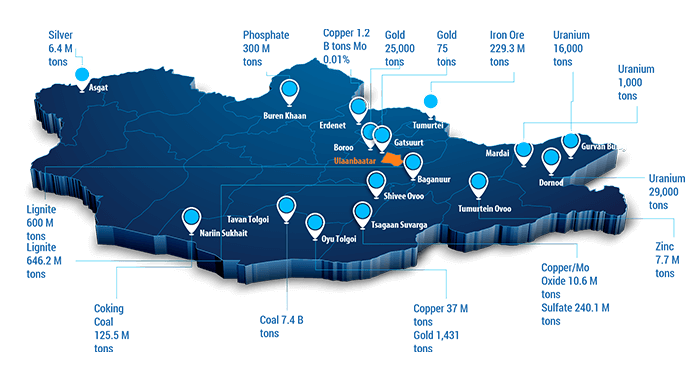 The mining sector accounted for 24% of the country’s GDP, 72% of the gross industrial output, 89% of the total exports and 70% of the foreign direct investment respectively which clearly demonstrates the mining sector’s vast contributions to the socio-economic development of Mongolia.

The Central and Eastern parts of the country is relatively well studied while western part is untapped which we are aiming to unlock its mineral wealth by cooperating with our investors.

The Minerals Law was amended on July 1, 2014, bringing a number of positive changes which should eventually help in attracting further investment. The amendments to the Minerals Law will be discussed in greater detail below.

The Minerals Law lays out the framework whereby companies, both domestic and foreign, can obtain exploration and mining licences.

Pursuant to the Minerals Law, a holder of an exploration licence is granted the exclusive right to obtain a mining licence if the holder deems the mineral deposit to be commercially viable.

The Minerals Law outlines rules concerning what are deemed “strategically important deposits”, and allows the state the ability to acquire certain ownership interests in companies that are exploiting such deposits. If state funding was used during the exploration phase, the state may purchase up to 50% of the shares in a company exploiting the deposit. If no state funding was used, the government still has the right to acquire up to a 34% interest in the company conducting the mining activities.

Until this law was passed, there had been temporary moratoria on the issuance of new exploration licences since 2010, stemming from investigations into corruption at the Minerals Resources Authority of Mongolia.

Repealing the prohibition on the granting of exploration licences is certainly a welcome move for the investment community, as it demonstrates the Mongolian government’s willingness to take steps to encourage economic growth.

Invest Mongolia team is happy to
help you via its complimentary e-Consulting service.

© 2022 Invest in Mongolia | Ministry of Economy and Development. Made by B.Tuguldur in Ulaanbaatar.